That was what Lex Dove was – an agent of death. But not anymore. He had retired to the fictionous island nation of Manzanilla - not exactly a paradise, but it would have to do for him. He believed that his life of killing in the name of the Queen, however noble it was, no longer fit him and he would like to be rid of it. Unfortunately for him, if that was the case, we no longer had a novel to read.

Trouble came knocking on his door in the form of US Team 13, a specialized team dealing with the unknown. They were looking for local support who knew the lay of the region, who had experience in dealing with dirty works and who had close contact with the locals, for they need certain support in the less scientific realm – voodoo knowledge. Whether it was fortune or bad luck, Lex was in need of money, and he had no choice but to accept Team 13’s offer, as well as dragging in his friend and his cousin, Albertine, who just happen to be a voodoo priestess.

Their target was Anger Reef, just a small piece of land jutting above the sealine. Underneath though was a sophisticated but abandoned secret base of the US, except that it was no longer in the abandoned state. Even worse for it was the fact that there was an element involved which Team 13 believed caused the death of the original rescue team sent weeks before, an element which was supposed to only exist in comic books and horror TV shows.

As much as Lex refused to believe it, the Haitian Voodoo gods, the loas were onto him. Some granted him wisdom and blessings, whereas certain others visited him with less noble intentions. Even with the martial strength of Team 13 and the voodoo knowledge of Albertine behind him, he still may not be able to get out of this situation alive. As if that was not bad enough, an angry god await them below the base for his release by a mad voodoo bokor, who was looking for a confrontation with the Almighty.

If you haven’t heard of these names, you are not alone. Maybe one of the reasons why I felt detached from this novel is my unfamiliarity with the Voodoo, or the novel clarified, vodou religion. Voodoo is as much a religion in the Caribbean, especially Haiti, as Christianity is at large, but the general perception of it is not positive. To most of us, it is more black magic and superstition than a religion, and that may be the cause of most of our ignorance.

Still, its penetration into popular culture is not unknown, just unaware. Take for example the character Tia Dalma in Pirates of the Caribbean – her portrayal as a mystic but her surroundings immediately reminded us of Voodoo. And those zombie games you played and movies you watched? Voodoo. Or more correctly, hoodoo, the darker side of the religion. Yes, that’s right. Zombies came from voodoo.

Lovegrove, in his journey of crafting the Pantheon series, is commendable in bringing us this relatively misunderstood religion into his folds and crafted a story with Voodoo as his basis. This shows that he is serious with his series, researching into this myth and religion and sharing it with the reader by weaving a tale. Within the timespan of flipping through half the book, I had already became enlightened in the Voodoo religion more than I did before I opened the book.

However unlike the other myths, he showed relatively little godly actions within this book.

The lure of his previous novels in the series was how he presented a world of how the myth is real and how they had affected the modern world. The Egyptian pantheon in Age of Ra defeated all other pantheons and carved up the world among them. The Greek pantheon in Age of Zeus ruled with an iron fist, with the world under their collective heels. The Norse pantheon in Age of Odin had the least influence, only inviting the bravest souls to help them in Ragnarok. The Aztecs in Age of Aztec had the world following their sacrificial culture. But in Age of Voodoo, only a mad bokor and some godly manifestations that made no difference could even claim that this was related to the myth in the title. That, and zombies, veves and magical show of force (very limited in that last one).

Character: The Mortals and the Gods

Lovegrove could have done better by putting more grandiose involving more gods and showing how they impacted the modern world just as he did in the other novels of the same series. The military action he employed in his novels is still as furious as ever, and his grasp of character building is as convincing as ever. However the mortal tie between the man and the myth is rather lacking in Age of Voodoo.

Albertine is the voodoo priestess in the story, providing explanations as well as voodoo magical support to the team. It would be expected that she make some great show of force, maybe a good voodoo priestess vs mad bokor in a showdown. At the very least she should be calling in the gods for their participation, providing us a front seat in a titanic battle.

Instead what I got was a priestess who sounded very confident in the beginning but acted like a usual mortal when the battle raged. She was just the convenient character that happened to be there, providing a role as a dictionary of all things voodoo to explain to the team. In the second half of the book, her role was so diminished that I would expect her to be eliminated by Lovegrove at any moment.

Godly manifestations were disappointingly limited in appearance as well. Save for some visits in the dream and a few godly possessions, they might as well not be mentioned. The almighty Bondeye, the single entity which corresponded with the singular Christian God, was superbly disappointing in the end. Lovegrove may have tried to provide a surprising representation for this entity, but this substitution of a god was really unimpressive. 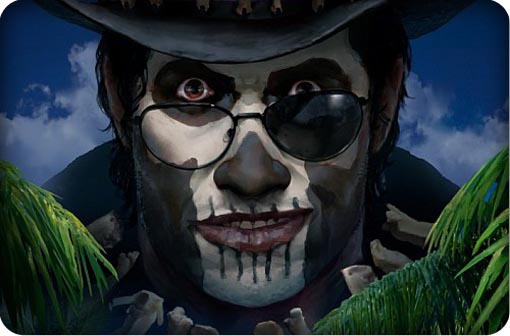 The grandiose of the previous titles was lost in this novel, dampening my expectation. That, coupled with the very limited show of gods from the myth, as well as their lack of impact on the story, would have made me loath the Pantheon series if this was my first book. Fortunately for Lovegrove, I have known his work through lots of his other novels, and so I would still vouch for him as my favorite author, albeit this not being my favorite novel.