Well, I guess everyone will have the same impression as I did the first time I read the title - "Shouldn't it be Caroline? Must be some typo there." And that is the same response people gave her.

Young Coraline was not happy with her life despite the fact that she was only a kid. The adults around her acted a little weird sometimes, making her the more mature one in her mind and she felt bored about that. Her parents worked all day in front of the computer and nobody played with her. The fact that people kept calling her 'Caroline' didn't help much either, making her felt more that adults were stupid. So when she found the door which usually opened to a brick wall opened to the Other World, with the Other Mother and Other Father on that side, she was quite surprised. The Other World was much fun than this original one, and everyone remembered her name as 'Coraline'; this world was her dream come true, since what she wished for at her world did happen in this world.

Of course, she still longed for her own world and her own parents, but her parents were missing when she returned to her own world. The Other World did not look as friendly then, since she found out later that, with all her sweetness, the Other Mother will discard her once she is not interested in her anymore. Coraline will had to muster all her intelligence, courage and will to get past the Other Mother, get back her parents and go back home in one piece.

The story is quite simple, yet a master writer like Neil Gaiman turned it into quite an adventure, even if this is meant for kids. The plot is straightforward, yet I enjoyed the way it was presented. Young Coraline is very intelligent for her age, and in the story she had to face horrors to get to her destination. She observed her environment and took note of things, and she solved them in ways that were simple yet slightly ingenious, ways that only a kid will think of, which one of the reasons for me to love Coraline.

Neil Gaiman is famous in his stories which feature fantasies that we usually never imagined. His more famous fantasy novels included American Gods, Anansi Boys and Stardust; he had also written for comics, and the more famous one is the Sandman series published by Vertigo. By utilizing his writing and imagination in a book for kids, this book will be instrumental in getting a kid's imagination running. This fantasy of his included a horrible villain, the Beldam featured in this story, and assorted horrors which Coraline needed to overcome in order to reach her way out of the Other World. The way it was presented was not unlike Hansel and Gretel, and sometimes I felt that the button-eyed characters of the Other World to be more horrible than some other stories that I read, so you may want to read the story with your kid just in case that his imagination got the better of him.

Apart from the novel edition, a graphic novel edition was published as well, helping kid's with their imagination if they are unable to comprehend the novel edition. Coraline is meant for kids when Neil wrote it, so the story is quite short, at slightly less than 100 pages, but the story is littered with illustrations as aids to the imagination. Even with the recent movie release, the novel and graphic novel is still worth a read. For a kid, it definitely offers a reading avenue for improving his English language.

Just in case anyone is interested in the movie, here is the link to it, still working at the moment: Coraline 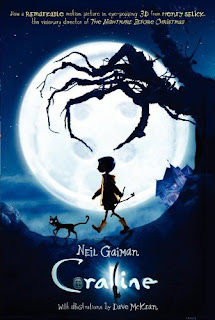 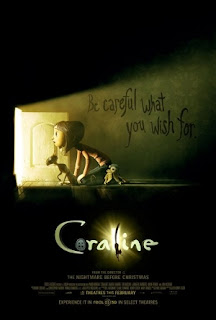