Showing posts from July, 2012
Show all

by James Lovegrove This book is a totally awesome combination of mythology and sci-fi mated with page-turning thriller and relentless actions that blows your mind away. So profound is the story that my first experience with Lovegrove's The Pantheon triptych is enough to compel me to return for the others of the same series. Although it was originally intended to be a trilogy, it was never explicitly mentioned as so, and so the series which features independent and unrelated stories of gods walking among human in modern era extended into its fourth installation, effectively throwing everyone off the original assumption of a trilogy. Even Lovegrove himself is no exception. Perhaps there is the hand of god in play here. One-liner intro: Showdown of Clash of the Titans  and Crysis  in a modern era. Best part: The depiction of Greek gods and mythological beasts as well as the fight against them; the revelation of how they came to be; the brains and detective deducti
Post a Comment
Read more

by Elle Pepper Note: This is a book review based on a free copy from the author. Many thanks go to the author for this generosity. When I got hold of this novella, I was expecting a swashbuckling story about a pirate's adventure on sea, maybe not something of the magnitude of Pirates of the Caribbean , but at least with a story which I could relate to a pirate. Unfortunately, the only thing I could relate to those scoundrels at sea was the fact that the protagonist and his crew were pirates. The Story of the Dragon Wynd The summary of the story was thus: Jalen Shenn, captain of the ship Dragon Wynd , was constantly persecuted by the Empire, even prosecuted for made up crimes which he did not commit, all for the reason that he was carrying his family's name. He was betrayed by his most trusted crewman while serving under the blue flag of Freehold, and his wife was caught and never to be seen again. Plagued by the relentless persecution of the Empire, th
Post a Comment
Read more

Singapore Library - Double Up On Your Reading! 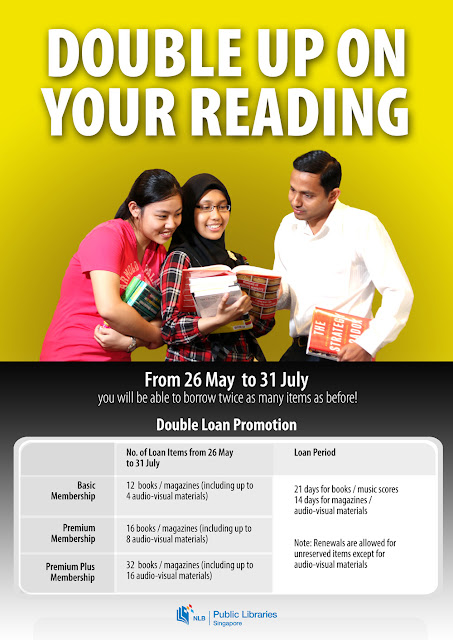 Do you know that libraries across Singapore now allowed members to borrow double the amount of reading materials from 26 May - 31 July ? If not, it is still not too late to start borrowing and reading more than ever on your favorite materials now. More information is available in their announcement webpage here .  Poster obtained from NLBS , click to enlarge. Happy reading folks!
Post a Comment
Read more
More posts