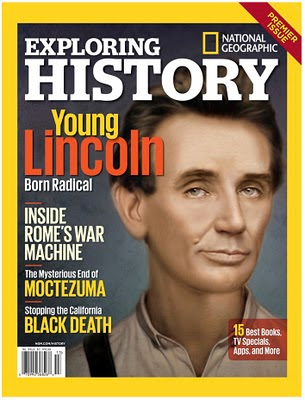 I wandered into the bookstore when I was loitering in the mall as usual, and would have completely missed this if not for my girlfriend who usually spent her times among the magazines section. Exploring History is a new magazine from National Geographic, and with its issue stated as "Premier Issue" and a published date of "Fall 2011" there is no indication of whether this is a one-off or a periodical. Funny thing is that although everything I searched online showed a different cover, the one I purchased was of another cover.

Exploring History covered a wide range of historical topics, and most of them are adapted from articles published in National Geographic's other publications. What differed this magazine from the usual National Geographic magazines is the fact that the latter is too varied, covering topics from geography to politics, whereas the former dedicates itself fully to historical topics.

What really drawn my attention to it was the coverage of Abraham Lincoln's obscure childhood to his presidential inauguration, and how Moctezuma, Aztec's last emperor lost his empire after encountering the Spanish. With news covering how dirty politics could be in our modern society, it is quite a surprise to know that Lincoln "did not smoke, chew, curse, gamble, or drink" even though raised in a rough-cut male culture, and that he opposed slavery when he was surrounded by slavery sympathizers, making him the most intriguing president of the US.

Other articles in the magazine are quite refreshing as well, covering the following few topics: 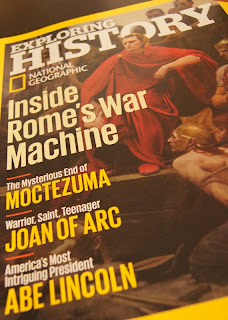 To history buffs, this is an issue not to be missed, with it covering history from ancient Egypt to the Roman empire, from the Aztec Empire's demise to the American Civil Wars. As usual, detailed illustrations and photos provide visual aids to the reader in his understanding of past civilizations. At nearly 100 pages, it could be considered a nice historical lesson for a quiet weekend, although its whooping price of RM47.90 may be considered costly to our limited Malaysian's pocket money... 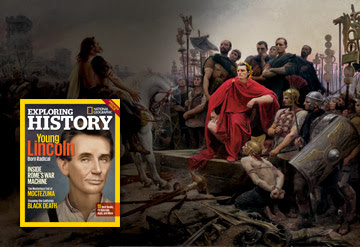