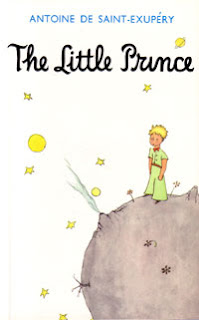 No, I am not French, nor could I communicate in French, but I am reviewing a French novella, or at least one written by a French. You do know that the famous The Little Prince is actually written in French, right...? Well, at least you do now.

Although I have heard of the novella for a long time, I have never thought of seeking it out. No one around me seemed to be able to tell me what the story is about either, or why it is so famous. So a little while ago, out of boredom, I sought the English version out and read it, and was captivated. 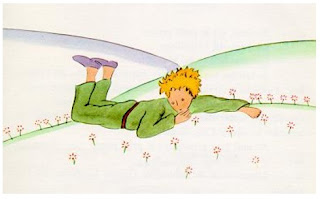 Although the novella is meant originally as a children's story, quite a number of English terms are difficult for beginners of the language, such as baobab, conceit and tippler. If you are reading to your kids, you may want to spend time explaining these terms to them and improve their vocabulary list.


The Prince originates from a speculated asteroid named only as B-612, "where everything is very small". The story traced his everyday life in his home until he left his planet to explore the universe, which journey led him to meet a colorful array of characters until he reached Earth. The author, himself the narrator in the novella, made the Prince's acquaintance when he was struggling to repair his downed aircraft in the middle of a desert, listening to the little one's story and narrative.

The theme of this story revolves around the view of adults from a child's eyes, which usually finds that matters of consequence to adults are actually quite meaningless. Also worth noting is that the persistent Little Prince is much like most kids, not letting go of a question once it is asked.

To the Little Prince, the view of adults are almost always focused on the outlook, not the essence. I have to say, I do agree on that: as an adult myself, I am constantly falling prey to this kind of perception, looking at things the way they are, but not interested in its essence. In other words, we adults are materialistic.

The journey of the Little Prince to Earth led him to meet up with 6 different characters, each of which represented a different type of adult.

King: To the king, all men are subjects. He is self-centered, bossy, giving commands that is expected to be obeyed. Sounds like your boss doesn't it? But this king understood that his command must be reasonable, and that disobedience is the fault of the commander, since authority rests first of all on reason. 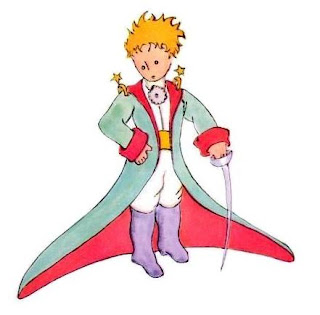 Conceited man: To him, all men are admirers, and he never hear anything but praises to himself. Quite a self-centered person, but always happy nevertheless.

Tippler: He keeps drinking to forget of the very action he is performing: drinking. Much applicable to workaholics as well.

Businessman: The most interesting, yet most applicable, character of all. He most realistically reflect our life - he owns things and actively seeking to own more, but he himself is of no use to the things he owns. Owning things is just a way to satisfy his greedy needs but accomplishes nothing else.

Lamplighter: Perhaps the most useful of all characters since he is doing a job that is useful to others, as the Little Prince noted. He follows an order obediently and unquestioningly, and he is the only person who thinks of others instead of himself. 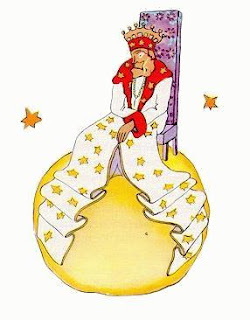 Geographer: He is a recorder of landmarks, but he himself never see it for himself. He is much of a theorist, but he is practical int he sense that he will send out inquiry into an explorer's moral character to make sure that the record is trustworthy.

Throughout the story scattered wise words of reflection on our adult life, all spoken through the characters the Little Prince met in his journey, most of all through the fox.

For certain, the most memorable is the words given on beauty. We rarely appreciate the things around us because we did not spend enough time on it. Beauty takes time to spent on it to be valuable, and what gives a thing its beauty is because it is invisible. A spring water in the midst of the desert is most sweet because you could not see it. Your loved one is most beloved when you could not see him/her. It is because of this that rituals like fasting are performed, so that people will remember and appreciate the sufferings of the past. 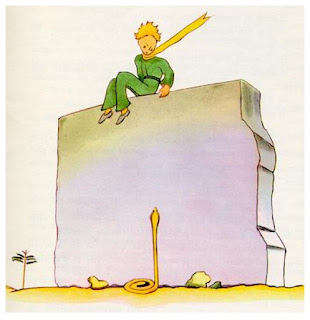 For a children's book, I admit that the ending is surprisingly sad. Tears welled upon my eyes at the end of the story, and I could understand why the story was lauded as one of the best story throughout the century. If your kid understands the sadness behind the ending and weep along, it would very well mean that he has a heart as innocent as the little prince, and that he requires your love and care as much as the little protagonist did. And if you did as well, that means that there is still a little prince in your heart, that innocence lost after all the affairs with grown-ups, just as I did.

The grown-ups are certainly very odd.

There is a free online version available through here. There is even a list of very good quotes from the novella published under this web: Wikiquotes.