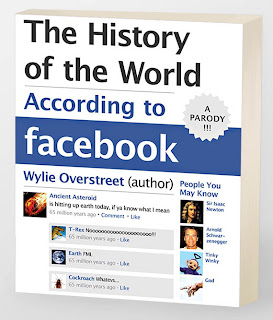 Hur!!?? I wasn't sure how to treat this book. I wasn't even sure under what category this book should go. Should I be incredulously surprised that something on this topic could ever become a book at all or to be equally surprised that I would pick it up and flip through every page? Nevertheless, if that fella Overstreet could whip up a book just by collecting fictional status updates from history, I shouldn't be too concern about trivial things such as this.

From Pictures to Book of Pictures

Overstreet is not an author of any book, at least not yet, except for The History of the World According to Facebook. According the website Cool Material, it started out as a thought: what if the popular social website started out on Day One, and everyone and everything has a profile in it? What would Abraham Lincoln would have written on his status update? Out came a few edited pictures featuring famous people and events, all portrayed in hilarious status updates and exchanges of comments. Next he was approached to turn the idea into a book. And there you have it, the book. Kind of interesting how it work out though...

The History of the World According to Facebook is essentially just a long list of Facebook status updates that formed the hilarious parody and as an introduction to world history from a different point of perspective. At least readers are more interested in history this way. This book is definitely not for the religious or perfectionists, because it is supposed to be a parody and makes fun of certain religious and historical events in order to make the reader laugh. Just don't get upset over a colored picture book OK? 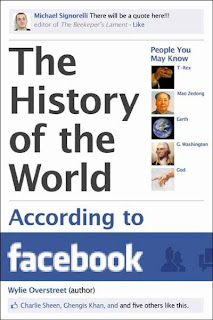 Of course Facebook did not exist when the universe was formed, and God definitely cared less to update in the social networking site. Because of all these facts, it makes this book much more interesting when Overstreet gave them a fictional account and started updating on behalf of them.

The involved parties are not all historical - some are fictional characters from movies but portrayed within the timeline as if it really did happen, making the reader who manage to hold his laughter to that point of the book to read in surprise and continue laughing. Take for example the following few parodies:

War may be an atrocity and terrible as hell, but with The History of the World According to Facebook, it was presented in funny ways that makes you forgot about the word "atrocity". Some examples of his parody included:

Sharing of Status and Check In

There has been numerous warnings and advice against the public sharing of your current status such as 'alone in home' or real time check in of your current location, and not without reason. The fact that there could be stalkers who are on the lookout to catch you off guard in order to commit a crime makes such sharing easier for them to understand the environment you are currently in as well as the location you are in, as well as for them to plan the crime.

This fact is illustrated in The History of the World According to Facebook as well, although thrown into the mix is a little humor as well as an introduction to history.

With a twist of his creativity, Overstreet has gave everyone and everything a profile. Now even events (Dark Ages, Renaissance), non-humans (Flora, Germany, Single Cell Organisms, Primates) and groups (Pilgrim Plymouth, Aztecs) are given a Facebook account to post their opinions and 'likes'.

The subtle but still interesting point of his book is that a few of the profile pictures used a fictional character with the same name. Take for example that when John Hancock was given a profile, his picture showed the character of the same name played by Will Smith in the movie Hancock.

And of course, some other status updates are really hilarious and mind-boggling, such as when Maradona thanked God for that 'left hand' in scoring the winning goal.

The book is well received by most people with its hilarious twist of the history of the world, and really does a good job in making me laugh throughout the book. Some of the points of history that is featured in the book even gave me a lesson in history. The existence of Plymouth Pilgrim was not known to me before I read this book, so I guess this book really is an introduction to the history of the world.

All in all, you could buy this book and have a good laugh, or just place it in the toilet to spend time with while waiting for your business to be conducted. Your choice.

More about this book could be found from the following sites: Cool Material and Facebook. 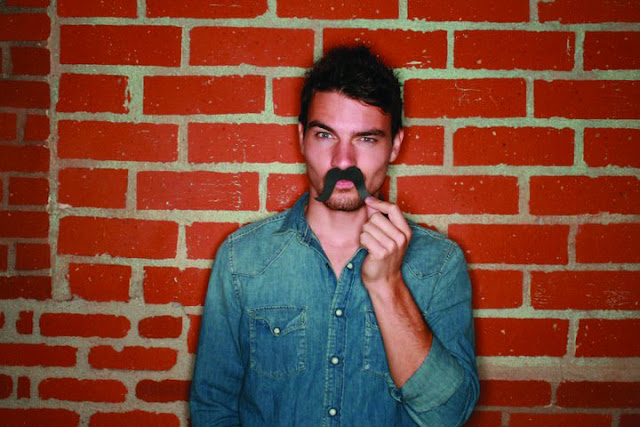