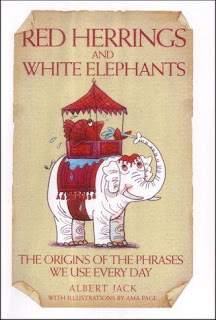 What does either a Red Herring (a false or misleading clue) or a White Elephant (something useless, usually pointing to public buildings, that becomes a burden, much like our country's facilities...) has anything to do with their respective meanings? Just as the foreword of the book implied, such sayings are part and parcel of the everyday English and most native speakers are familiar with them, seldom giving them a thought.

Unfortunately non-native English learners will most probably be confused, even perplexed, by the choice of words. Although the usual response from teachers are to 'learn by heart', it does help to know the origins of such phrases and have a laugh at it while closing the distance between the learner and the phrases.

Even native speakers who apply such phrases will almost certainly at a time or another have thought of why certain sayings sound so ridiculous and how did it get to become as such. Red Herrings & White Elephants, as its title spells out for the interested lot, serves to provide an answer to those questions and put a lid on it. 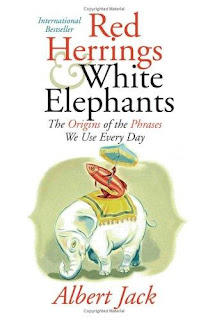 The Origin of Phrases

Tracing the phrases to their origins is hard work but Jack's effort revealed that most of them originated from interesting, if not unexpected, sources. Not all of the provided sources and origins are clear since most of them have evolved over the years, with their roots lost in time. In cases which the root is ambiguous, the author is nice enough to mention that, bringing up the most plausible, and in some cases the funniest, origin which he thought most likely.

It is interesting to note that most of the sayings do not even originate from the English language, and are cobbled up from Anglo-Saxon, Latin, Greek, French, Swedish, Norse (when it's raining cats and dogs or when someone went berserk), Hindustani (when someone has gone Doolally), Jewish (when you tell someone to eat his heart out) and even Gaelic (when you declared something as phoney), just to name a few.

The sources are as varied as well, with some coming from famous stories such Aesop's fables, Greek and Roman legends, and even from the Bible. Many famous poets and writers contributed to the phrases as well, with the works of Shakespeare, Hans Christian Andersen, Charles Dickens and Robert Louis Stevenson being referred to as possible sources. Even an engineer was listed as a contributor (my favorite principle for engineering design, 'Murphy's Law', though heavily disagreed  by my managers and project coordinators).

Not all of the phrases came all the way from the ancients though. The sayings trace their origins across different time span, going as far back as the Greek and Roman Golden Ages, through the Medieval and Middle Ages, Renaissance and Industrial Revolution, right to the more recent World Wars and our modern timeline. Talk about the depth the English language draws.

The following are but a few of the phrases taken from Red Herring & White Elephants which most of us employ, with facts which I found quite interesting if not amusing.


Red Herring & White Elephants is also a good companion for learning or improving your English vocabulary. The book could be treated somewhat like a dictionary and, with origins and short stories associated with the phrases, the learner could remember the phrases and their meaning easily.

I believe reading this book is a better way to learn the language rather than memorizing them until your brain could take no more. Pick a few of them and try to use them in your everyday conversation, if only to amuse your English speaking counterparts. You may even surprise them with a few which are rarely heard of.

Teachers of the language, especially one teaching ESL (English as a Second Language), would benefit from the book as well. At the first sign of boredom your class shows in an English course (you should be able to notice the blank looks and nodding heads), swipe Red Herring and White Elephants out and start to ask them why certain phrases are so.

Choose the most ridiculous ones or ones which meaning is almost unrelated to its phrase (I think none will catch more attention than 'to swear on your testicles'). Entertain them with the origin and its story, and watch your students swarm to your class with expectation on the next class. That will drill the language into them better than any other method.

Having said that, do be careful of using the phrases found within Red Herring & White Elephants on everyone you converse with. Some of the phrases will sound a little ridiculous, and may sound offending, especially if your listener is not familiar with it, which most likely is the case in Malaysia. However the reader could always share the phrase with native speakers of English to see if they are amused, enlightened or pleasantly surprised by you uttering it like you had spoken it all your life.

Another thing worth noting is that not all phrases are meant to be used in a written context. Mentioning 'laughing stock' in your writings or reading 'peeping Tom' from the papers are usual, but 'a load of balls' and 'codswallop' may be better left to conversations. I guess nobody will use the latter two, since there are clearly more vulgar words available, but it does have a better ring when you are trying to sound more gentleman, or trying to sound like Sherlock Holmes...