A Guide to the Star Wars Universe, 3rd edition 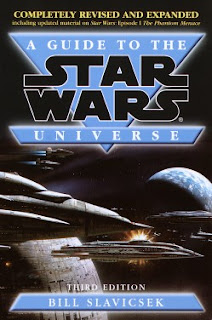 
Flipping through the browning books on my bookshelf, I found this long buried guide to that galaxy far far away, reminding me of my long lost interest in Star Wars. A Guide to the Star Wars Universe is a must have for die-hard fans like me in an era when internet is not as pervasive, and you just wanted to know a little bit more about that character or planet which you just read off the latest Star Wars novel.


The guide is organized like an encyclopedia, with articles on characters, organizations, planets and even artifacts and events. All the articles are arranged according to alphabetical order, allowing the reader to refer to his favorite scoundrel easily. The articles are all summarized according to published works on the Star Wars universe, which included novels, comics, radio programs, role-playing books, and of course, the movies. Since the guide is published in the year 2000, only the first of the prequel trilogy, The Phantom Menace, is included, as well as the first of the New Jedi Order series novel - Vector Prime. The illustrations in the guide is quite limited but still helpful.

Since Star Wars is a fictional universe developed around published works of novels and other literature, it has included in the footnote of each article where the item of interest existed. For instance, Garm Bel Iblis, the famed general who only existed in the Expanded Universe and not in the movies, is listed to make an appearance in works like Dark Force Rising and The Last Command. 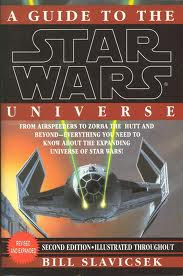 In this era where internet makes searches and information accessibility easier than ever before, a guide like this one is definitely too unwieldy for users. A click on an interactive hyperlink is all that is needed now in Star Wars wiki, and most information is updated as soon as new items is introduced into the universe. This goes to show how easily publications can be obsoleted by the internet and Web 2.0.

Although the Star Wars universe is still expanding, a guide like this is still quite useful when you are reading the older novels, although I prefer to interactive Wikipedia over it. No harm in getting this guide to adorn your bookshelf though as it will fit snugly into the collection of Star Wars material you own.