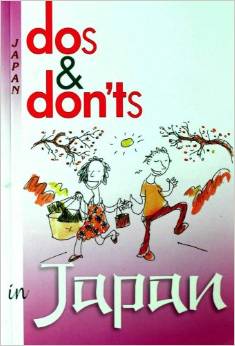 It has been a hectic year and I was shocked by how much time has flown past since I last typed a blog entry here. Fortunately I got myself a nice read to share here to get myself jump started into continuing in this blog.

I have always been interested in the Japanese culture. Their products and cultures have pervaded most of lives nowadays, from the sushi and sashimi bars sprouting everywhere to the manga and anime which I chased with a fervour much like housewives following soaps. My hectic pace of life have not avail me the chance to plan a trip to the land of the Far East, but this book here gave me some preparation on what to expect from this isolated nation.

One-liner intro: What to do and not to do when in Japan (as the title suggested).

Best part: Refreshing look into the nation and its culture; summarized and concise, without too lengthy explanation; examples of what others did wrong when they were in Japan; suggestions useful for business travellers and backpackers alike; illustrations which although not really useful, provided a more leisurely read than plain words.

Not-so-best part: None, this is just the perfect book for travellers, more so than those voluminous guide books.

Synopsis: To Do or Not To Do

The Japanese is one of the most peculiar culture on Earth, and that is not a racist remark. Many who get in touch with this culture for the first time felt confused by the way they do things, which is way more different from the already unfamiliar oriental culture. If you are one of those who felt so (which I am even though I am a Chinese), then this book would help you get past your culture shock.

'Dos & Don'ts in Japan' succinctly brings the traveller into the exotic land of the Far East, guiding you step by step from your landing at the airport all the way into Tokyo itself. Although the book shared certain differences in Japanese culture outside of Tokyo, the capital remained its main focus. So if you are visiting Osaka for example, it would be wise to read other guides with focus on the local area while this book as a general guide to the culture as a whole.

Its numerous dos and don'ts are portrayed in a light manner rather than bogging readers down with boring old school English. Examples of other cultures making mistakes when they do not know the culture make them a joke to be laughed at but guarantees that you would remember not to make the same error.

If you were to visit a traditional inn, you would remember not to repeat the same mistake of the American couple, who after finishing a dinner served in their room, proceeded to make love without knowing that the room maid would enter to clean the dishes without advance notice. It would definitely be an embarrassing moment.

A guide into Japan

'Do's and don'ts in Japan' is not only a to-do list of the Japanese culture, but also a guidebook by itself albeit a very general one. It does recommend some interesting sights of Tokyo and shed light on certain sectors of the capital for readers in a concise manner, allowing readers to choose whether to dwell deeper on their own time.


Where to stay, what to eat, what to do and what to see, all these are covered within this book, providing readers a general idea of what might pique your interest. I did not realize that there are various types of cafes in Japan, all unique to it and catering to various genre of clientèle before I read this book. There is, for example, manga kissa, nothing to do with kissing, but is a game cafe where they cater for couples who enjoyed gaming and manga reading together.

Weird and interesting stuff are abundant in Japan, and not just limited to cafes. If time is what travellers have in abundant, some weird and unique museums like Irish Buttons Museum and Laundry Museum would be nice to kill time, although why you would visit such a place is a guess as good as mine.

Of course eating is the most important task to consider when travelling, and more so when you do not know how to order in a country where English is not widely spoken and where eating culture is so distinctly different. Fear not, as this book advises on how to order from the menu even if you do not understand Japanese, and what to take note of when eating. Chopsticks, for example, should not be stuck into the rice as that is how it is prepared for the deceased.


Ready to Go to Japan?

If you are planning a travel to Japan, be it a personal leisurely visit or a business trip, 'Dos & Don'ts in Japan' could be indispensable, especially so if you are not familiar with Japanese culture. With this book in hand, you could just flip to the appropriate section and read what to do or not to do when encountering life transforming situations.

This would be in situations such as when you are about to enter a hot bath naked only to realize it is scalding hot rather than lukewarm. Or when you understood the horror on the Japanese maid's face when you realize that wrapping the right side of your yukata over the lef tis how the deceased is dressed.

So enjoy this book and hope you DO the right thing and NOT DO the wrong thing.