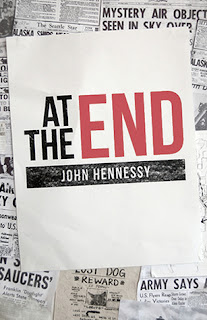 Let's just face it, for whatever warped reasons which infest our minds, we are drawn to stories of apocalyptic or post-apocalyptic scenes, envisioning a future where the end had come and gone, with the survivors living in a world where necessities of life had to be reevaluated and priorities reset in order to get through the days. Hennessy's At The End fits into that genre perfectly, and is comparable with apocalyptic blockbusters like The Day After Tomorrow and 2012, although it lacks the grandeur.

Best part: Danger lurks every corner, there is no lack of adrenaline pumping events; good portrayal of characters made them recognizable; smooth switch of style between different character's narrative made it recognizable; no ridiculously drawn-out love scenes; futuristic yet believable technologies with well thought-out details.

Not-so-best part: An ending that is a little too bizarre; the usually unbelievable case where a few untrained teenagers outdo trained soldiers.

The End is Nigh

With the abolishment of birth control, human population bordered at 39 billion at 2048. All this meant naught when billions start to disappear mysteriously without a trace. 13 billion were taken on the first day, another 13 billion the next. A trio of surviving teenage gamers found themselves fighting for their lives in the wake of civilization's collapse, experiencing first hand whatever they had been playing for real. As Maggi, Darrel and Felix tried to escape whatever pursue and horror at their tails, they may stumble across the truth behind the disappearance and they may not be able to do anything about it. Or even to survive it.

The relationship between the flow, pace and plot of the narrative is so similar to certain post-apocalyptic first-person shooter, especially with gamers being protagonists, that I couldn't help but link them together. One which comes to mind in particular is the once popular first-person shooting game, Half-Life 2, for the reason that the encounters within both stories shared much similarities. For avid gamers who also happen to be readers of this novel, At The End might substitute for a novelization of those fast-paced post-apocalypse games.

At The End is narrated through the eyes of Darrel and Maggi, with each telling his/her own piece in alternating chapters. Hennessy did good here in that both characters are written in different styles to suit the appropriate personalities. The difference is obvious yet smooth enough that the reader could immediately observe whose shoes they are in and fall into that pace with the protagonist's thoughts and emotions without breaking their stride and wondering halfway into the chapter who they are following.


From encounters with the third kind to saving themselves from humanity itself, the flow of At The End is truly exhilarating, adrenaline-pumping and fast-paced. At every corner danger lurks, threatening to pick off one of them with every turn of the event. Even when they succeeded in overcoming the latest barrier or looming danger in their progress, a moment of rest is when the next one strikes, allowing them almost no chance for a breath.

The deus ex machina of the story of how they saved the day in the end is a little too lame for me though, bordering on unbelievable. To give Hennessy credit through, is the fact that the story buildup is so smooth and the pace so intense that flipping past the page become natural. I only notice the lameness of the ending in hindsight when I tried to reread and recall for this review. Maybe it was just me, who played too many games with great storyline and greater endings that I set too high a target for the concluding chapters of At The End.


The People At The End

Hennessy's most believable characters remain the two protagonists whose eyes the readers share. Their reaction, fear, love, relief, and sense of insecurity hit deep with each word. Each moment could be their last. every step and observation readying them for action. All these emotions are shared through their words, bringing the reader along in their trail through the dangers of the world.

The involvement of love scenes is almost a norm for Young Adult genre, even with the world crumbling around them. Nothing could beat the hormones of growing adolescents. Yet I am grateful that Hennessy did not draw these scenes out ridiculously, but only involve them enough to show that there are relationships developing between characters, a relationship of which influenced their thoughts and actions as well as the choice they choose to take. The world is crumbling around them, and they should be busy surviving anyway.


On the down side, a problem which plagued Hennessy's story is the fact that the few teenagers survived far better than trained military personnel. One could tag that fact to luck, as it was frequently pointed out when this was raised in the story. With gamers who spent more time online and physical disadvantageous going to know how to aim and shoot straight the first time they get their hands on arms, the trick just got a little too old for me.

The World At The End

Being an engineer, it is hard for me not to notice the envisioned technology in At The End. I would say that Hennessy did his homework or is just a fan of technology that he created believable technology that may be in 2048.


Electrical vehicles which could run indefinitely with the right infrastructure, weapons which runs recoil-less by transferring the impact to other directions, solar-power collecting arrays from space... These are not alien to us yet as an engineer I could see that these are not that far-fetched as well. Certain engineering aspects are well thought out, like the case of a silent electric vehicle engine being a boon yet will endanger pedestrians since they won't be aware of a vehicle coming.

Such attention to the finer details of future technology puts Hennessy and At The End higher on my score list. Most sci-fi novels may like to create alien technologies with explanation that put it firmly in the realm of "science fiction", such as the well-used hyperdrive and force field. Hennessy's creation in the story made the world more believable, painting a fictional world that could well be true.

The End At The End

At The End may not be the best apocalypse novel out there, but it sure scores above average in my scale. For a Young Adult novel, I would say it is doing very good by introducing elements such as believable and detailed futuristic technology which some adult novels should have incorporated. With such action and pace, it sure is an intense page-turner, guiding my hands past page after page to try to figure out what could happen next. And waiting for the death that may rain on the world at the end.