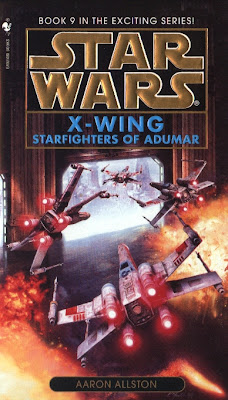 Starfighters of Adumar was the ninth and last of the novel in the popular X-Wing series before the long lull in the series. With the launch of Mercy Kill, I went back to reread the novel and to get myself back into the seat of Rogue Squadron before I go ahead to read the latest installation of the series.

One-liner intro: An engaging read of how pilots practice diplomacy - through aggressive negotiations!

The novel before this was involved in one of the antagonist which haunted the series for quite a while, Ysanne Isard, as well as the fight for the control of the galaxy between Imperial remnants and the New Republic. On Starfighters of Adumar, that struggle for power had not ended, but at least it was a fresh start from the old battles with Rogue and Wraith Squadron major antagonists.

In fact, this has more to do with Wedge Antilles’ future. The leader of Rogue Squadron finally gets a love match for himself, ending the story with a partner which readers of the series would be familiar with. The focus of this novel though, was the struggle for the alliance of the planet Adumar.

The peculiar fact that the neutral world of Adumar reveled in their pilots as heroes meant that Rogue Squadron became one of the more logical choice as the New Republic representative to vie for the planet’s alliance. To complicate matters was the fact that the Empire was also invited, so Adumar was obviously playing the idea of choosing the side with the better pilot.

Wedge was used to piloting and targeting enemies in space, and diplomacy felt alien to him. The New Republic ambassador who was supposed to guide him did not seem very helpful with him constantly withholding facts and plotting his own agenda behind the scenes. As much as he hated it, Wedge found that a battle would ensue and envelope the world of Adumar, and whether he liked it or not, Rogue Squadron was on their own to fight a battle against a whole world, and possibly an Imperial armada as well. 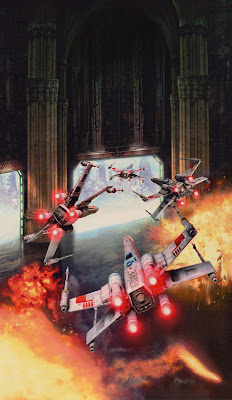 The novel does not only lean away from the predecessors by facing off new enemies and introducing elements of diplomacy. Since the representatives were supposed to impress the locals by using the Adumari aircrafts, the famous X-Wings and TIE crafts saw less exposure in the novel. Another fresh idea for the series is the fact that most scenes are conducted on the planet’s atmosphere, so instead of space battles, I read more of how the Rogue Squadron team members ingenuously utilize the craft to their advantage in dogfights.

Fortunately for a reader who shuns cheesy romantic elements, the love scenes of Wedge Antilles are kept minimum, employing just enough content to make a fighter novel not too cheesy yet delivered the idea of some relationship going on.

With Wes Janson in the picture, one could expect some humorous scenes and dialogues that helped enlightened a battle mood, making Rogue Squadron relaxed amidst a chaotic battle, evidence of a cool veteran team who had seen their fair share of battles.

With my interest rekindled in the series, Mercy Kill will be an enjoyable read as I seek to reacquaint with the members of Rogue and Wraith Squadron. Rereading Starfighters of Adumar also helped refresh my memory on how it felt like when the Star Wars galaxy was simpler, before deaths of familiar characters and alien conquerors. And it felt nostalgic.